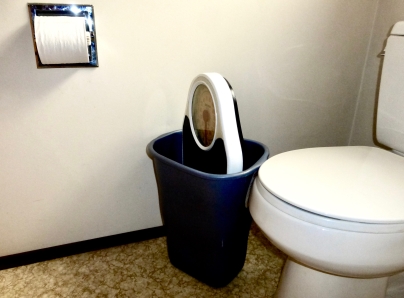 It all started last year around this time.  I returned home from a family reunion,  a 2 week vacation in Ontario celebrating a special occasion.  The festivities had included exquisite party food, an extra glass of wine or two, and at least one visit to Red Lobster.

At home, I decided to not step on the scale for at least a couple of days to allow time for my body to deflate, lose the water weight, get back to normal.

The scale was sitting in the corner of the bathroom, luring me to stand on it, coaxing me to tiptoe onto it, an almost daily habit I have had for 50 years.  A couple of days turned into a week. I would leave the bathroom each morning resisting the magnetic pull of the device that could and often would impact my morning mood, the clothing I would wear that day, the activities I would engage in.

After a couple of weeks I realized I did not miss stepping on the scale.  I actually felt better each morning now that a number would not dictate the quality of my day.  I noticed my day began with a lighter step.

One year later, my clothes do feel a little tighter, I am a little rounder, and my head still does not touch my knees in standing head to knee pose.   Ultimately, I am thankful for what my body is capable of doing.  A number on a scale does not determine how I feel.

This week my husband asked me where the scale is, the first time he has shown any interest in it’s whereabouts.  I  don’t think he was actually too heartbroken when the scale disappeared a year ago.  I had (almost) forgotten I had a scale.  I retrieved it for him with adamant instructions to place it somewhere I would not see it.  I did not want to be tempted to step on it and break the spell of living comfortably in my body.

This month I will begin another year of not stepping on the scale.  It is as if a weight has been lifted off of me.

Hi, I am Erica/Erika, an eternal optimist and a grateful Human Being.

There is always a story behind every photograph. I hope you will find my stories inspirational and thought-provoking. I am a work in progress, constantly learning, evolving and recreating. I appreciate you sharing your thoughts on this journey with me.

Click on "About me" to find out more about me and my blog.